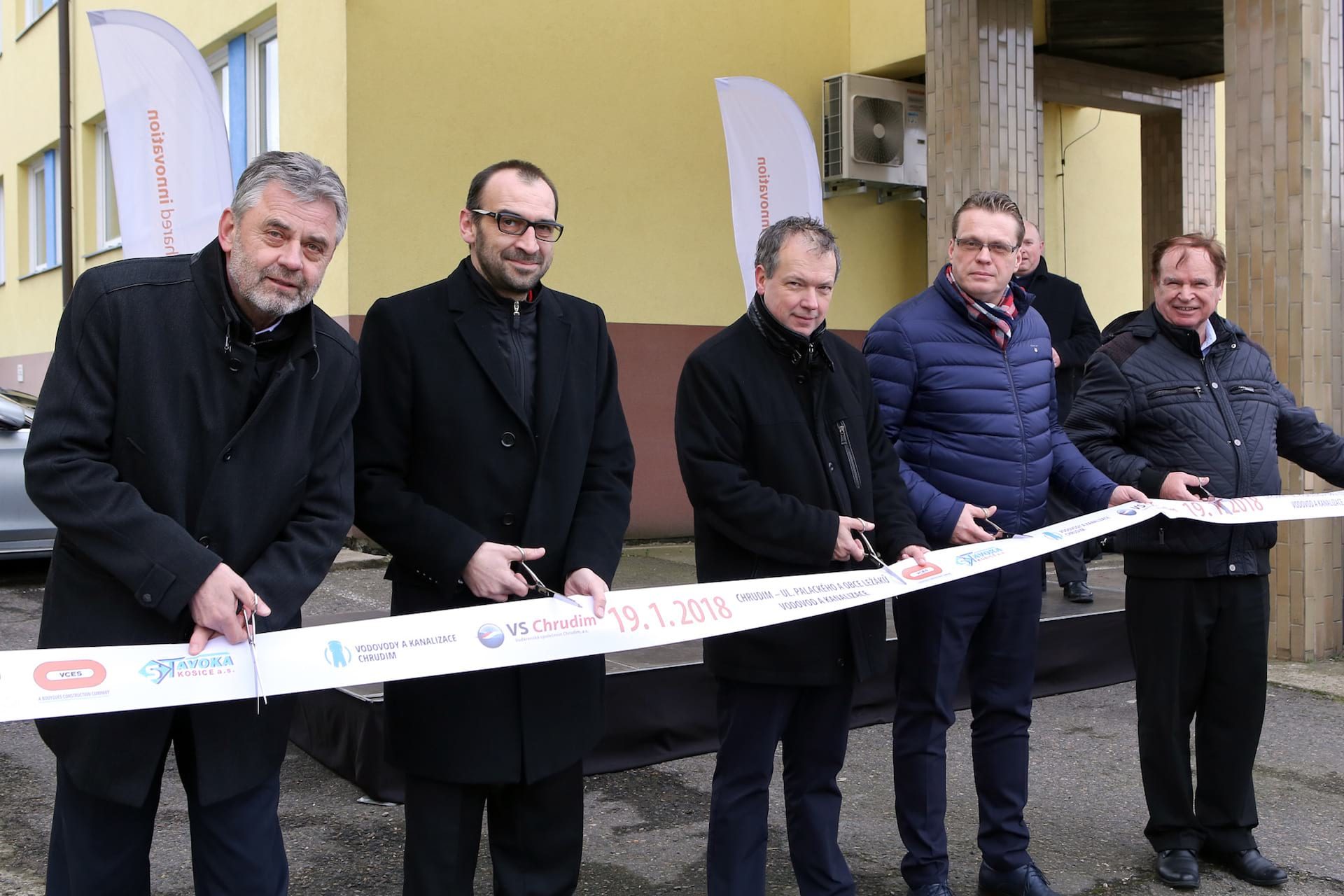 On Friday, January 19, a ceremonial ribbon was cut by representatives of Vodovody a kanalizace Chrudim, Vodárenské společnosti Chrudim, the city of Chrudim, and the contractors, thus symbolically completing the reconstruction of the water supply and sewage systems on Palackého Třída and the street of Obce Ležáků in Chrudim.

Reconstruction of the water supply and sewerage systems on Palackého Třída and Obce Ležáků was motivated by the reconstruction of these streets’ road surfaces, which had already been planned. At the time, the owner of the mains, Vodovody a kanalizace Chrudim, a.s., and its operator, Vodárenskou společností Chrudim, a.s., had evaluated the state of the water supply infrastructure as generally rather good, when significant damage was identified for only part of the street of Obce Ležáků. “However, it was not possible to guarantee that operation would be without disruption or that it would not involve necessary reconstruction of the roadway,” stated Jan Čechlovský, the chairman of the board at Vodovody a kanalizace Chrudim, a.s. “In relation to this fact, it was decided that the water supply and sewerage systems were to be reconstructed along the entire section of both roads,” added Čechlovský.

Costs for the construction part of the renovation of the water supply and sewerage systems reached CZK 47.062 mil., which the company Vodovody a kanalizace Chrudim provided from its own funds. The project’s technical documentation was supplied by the planning and design office of Vodárenská společnost Chrudim, a.s. The association of Společnost Chrudim VK, represented by the company VCES a.s. and Stavoka Kosice, a.s., was selected to be the contractor during the bidding process.

Construction work began April 18, 2017. “Over the course of eight months, we replaced 1328 meters of water supply mains and 1410 meters of sewerage mains,” Miloš Emmer, Sales Director for VCES a.s., estimated the scope of the work. “Modern materials were used – for example, the water mains employs cast iron pipelines with a polyurethane lining, which should ensure trouble-free operation for many decades to follow,” concluded Emmer. The construction work was hindered by the fact that it occurred while the water and sewerage mains were in operation; there was also the requirement that traffic be simultaneously limited on this city through road.

VCES at the BIM Day Conference 2016

BIM DAY 2016 – The annual conference of the Czech BIM Council (Building Information Modelling) was held in the first half of November at the National Technical Library. The largest domestic event focused on sharing current trends and experience with the issues of BIM in the construction industry has attracted a number of Czech and foreign specialists, since neither VCES nor BBI could miss such an event.